1 reply to this topic

....Ronsim Makbema begins recording the following transmission in his Armageddon Battleship; sitting high and mighty on his command chair: 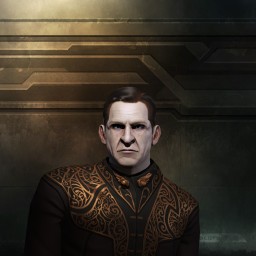 Dear fellow colleagues of the Amarr Empire, my name is Ronsim Makbema! I am a current solo-fighter of the 24th Imperial Crusade. I am looking to join my fellow Amarr brothers and sisters in Praetoria Imperialis Excubitoris [PIE] in order to fight under the 24th Imperial Crusade within the [PIE] military organization so as to better defend the Amarr Empire. Thus, please consider me within your ranks at PIE to fight along side fellow comrades. Additionally, for your reference, I have attached my details and current ranking...

...Ronsim Makbema ends the recording of audio and video, and implements within the transmission a holographic display of his current personnel information:

...The implemented hologram of the data has been formatted per Ronsim Makbema's implementation to pause at the data display at the discretion of the transmission operator.

...Ronsim Makbema finalizes the recording with the implemented hologram functions

...Ronsim Makbema begins packing the recorded media into a transmission under Amarr media standards and format for universal ship-use

Ronsim Makbema sits at his commanding chair within his ship; drinking the finest of wine, as he heads destination of his ship to the Royal Amarr Institute to get some pewpewlasers.

*The screen focuses in on a young red haired Paladin sitting behind a plain ffice desk with a model of an Amarr fightercraft on it. Without much hesitation, she begins her message.*

"Applicant Ronsim Makbemayour message has been received. Your presence is requested in the office of Paladin Ordinary Maria Daphiti of Praetoria Imperialis Excubitoris for interview pending acceptance to our organization. Be sure to review our PIE Ethos, Oath, and Employment Procedures document, as is required prior to acceptance."

"If you wish to familiarize yourself with Amarr history and what PIE represents, you may find these information portals to be quite useful:

Additionally, attached to this message is a form which must be completed. Please present the completed form at your interview.

May His light shine upon you."

Given Name ((Your character’s in character full name)):

Pilot Callsign ((Your in game name, you can omit if this is the same as given name)):
Ethnicity ((What bloodlines make up your character’s background?)):

Citizenship ((Which in game empire is your character a citizen of?)):
Background ((Details about where your character comes from. Especially what social class.)):
Education ((What school did your character go to?)):
Notable past employment ((Past corporations you have been involved with.)):

Standings with the Amarr Empire ((Your in game standings number with the Amarr Empire. Note that we can check this once you join and lying will be grounds for dismissal.)):
Reason for applying to join Praetoria Imperialis Excubitoris:
Please review our rules about allowed ships and behavior and confirm that you accept and will abide by them: